In April of 2016 the Santa Fe BID held an annual meeting to present their 2015 annual report and present to members of the City of Denver’s Department of Public Works, Councilman Paul Lopez and other departments a Priorities Proposal. This proposal was requested by the City as a way to communicate the BID’s physical and infrastructure desires for future improvement. Both documents take into consideration the feedback from area surveys of property and business owners. The BID is currently working on a 2016 annual report which will be available in April of 2017.

This year our community showed up to the various public GO Bond forums and enthusiastically participated by filling out the recommendation cards and placing map stickers. 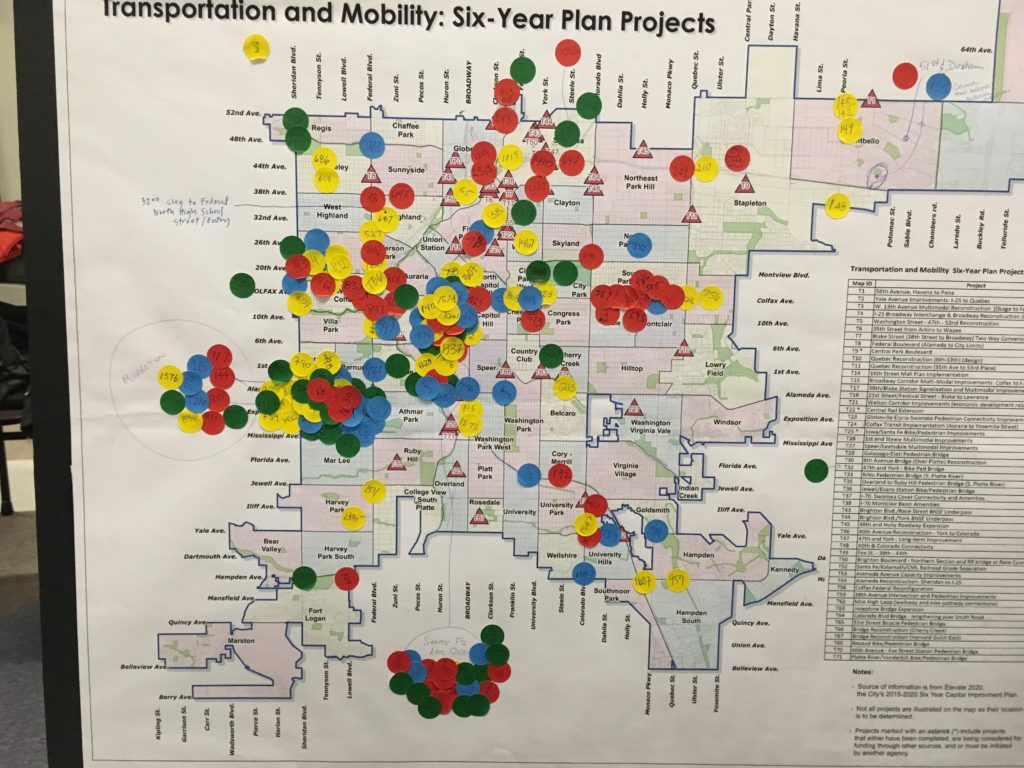 We have the full support of our District’s Councilman Paul Lopez and various members of the City Council for the recommended physical improvements we would like the GO Bond to fund. Santa Fe Drive is one of the oldest, if not THE oldest main Denver corridor and it is long overdue for major infrastructure improvements. Santa Fe Drive is also home to the State’s first designated Art District and hosts the largest First Friday art walk, not only in Colorado but the region, making it a huge attraction for art lovers and visitors. In addition, the last issuance of the GO Bonds did not serve the infrastructure needs of any West Denver area. At this time the community of Santa Fe Drive / La Alma Lincoln Park formally requests that the general obligation bond fund the following project components for the Santa Fe Drive corridor between 6th and 13th Avenue;

This request is based on #2 of the Intermediate Phase (page 2) of the Priority Proposal that was presented to city officials including the Department of Public Works in April of 2016 year. This request is also the result of a master vision plan that was produced in recent years that addresses the neighborhood’s history, Santa Fe Drive’s physical dysfunctions, potential traffic alternatives and proposed design plans.

On March 10th the Santa Fe BID invited Mayor Michael B. Hancock, Councilman Paul Lopez and various community and city dignitaries came to Santa Fe Drive for a walking tour and and Design Proposal Presentation at Volunteers of America.  (Continue Below) 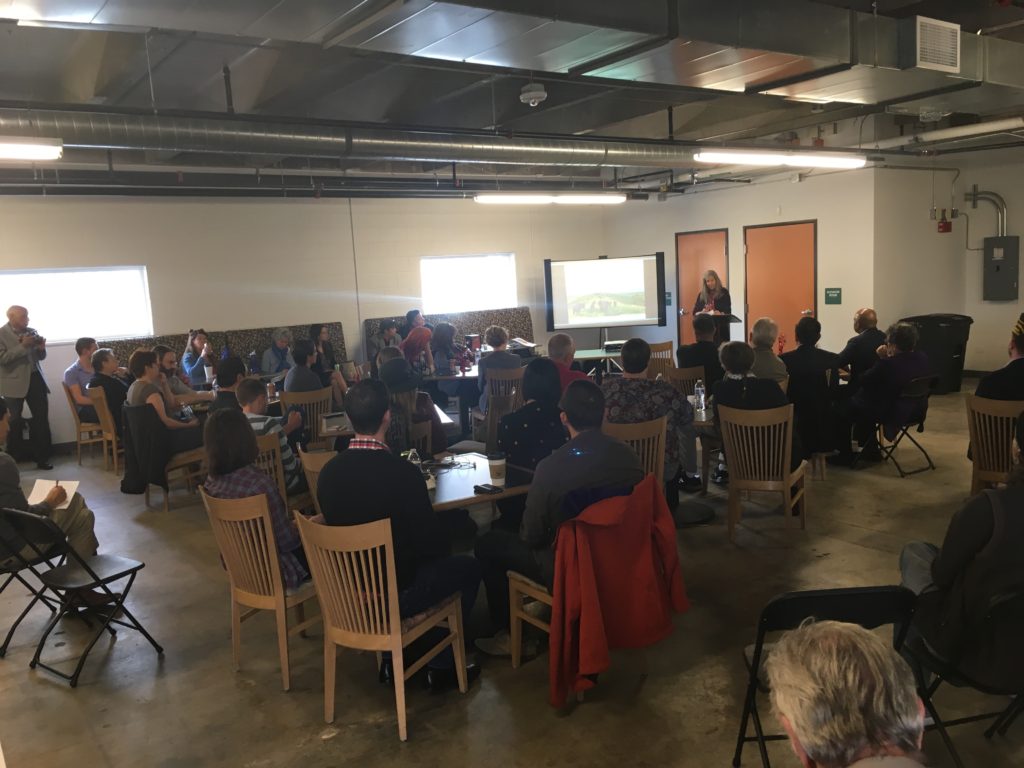 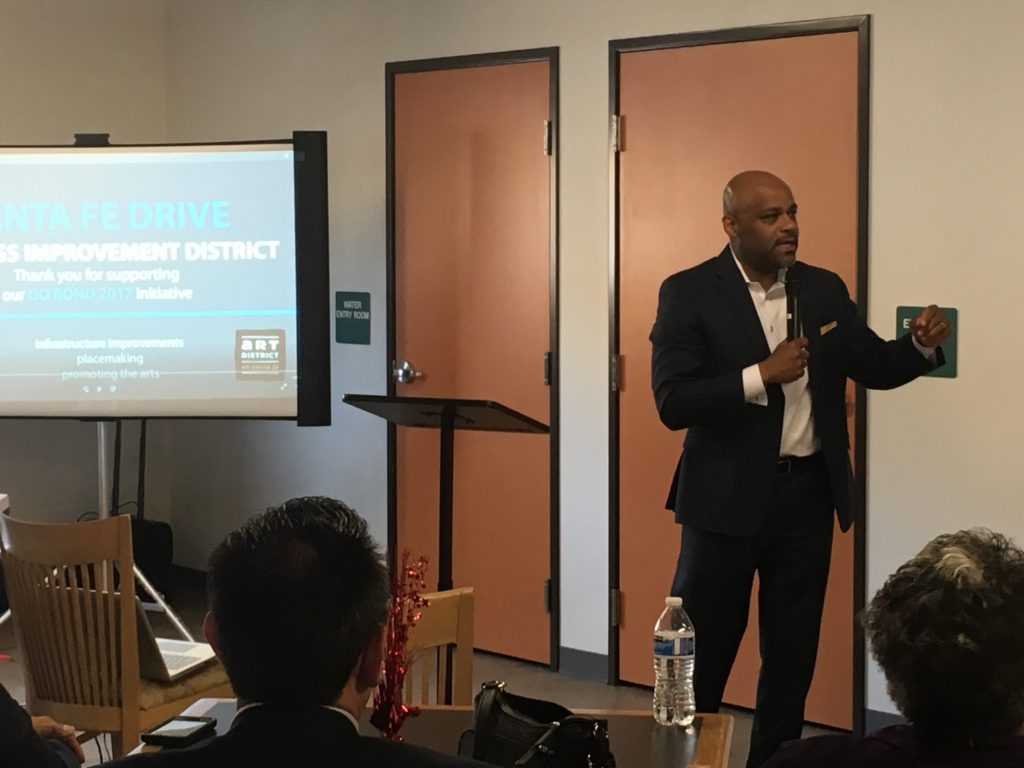 During the tour the Mayor Hancock and Councilman Lopez were given mini presentations regarding the challenges facing the corridor block by block by BID board members. It was also an opportunity for the Mayor and Lopez to hear from property and business owners. At the end of the tour the group convened at VOA for a full presentation of design proposal.

Since this visit the Santa Fe Drive GO Bond effort has received considerable media attention. The day of the Mayor’s visit Channel 7, Fox 31 and Telemundo were all in attendance and covered the visit on their afternoon reports.

Members of the The Santa Fe BID and various community members attended weekly Transportation and Mobility Stakeholder committee meetings from April through May.  On May 17th this committee release their recommended list of improvements separated by 3 tiers. Santa Fe Drive’s proposal was ranked closely at the top of Tier 2. See full list HERE.

Various members of the Santa Fe BID and community members met with Evan Dryer, Councilman Paul Lopez & his aids, Karen Good from Public Works and the City’s Department of Finance to discuss the improvements that were not approved in this year’s GO Bond process that the Santa Fe BID put forth for consideration. It was at that time the City committed to allocating in the 2018 budget $500 thousand towards and initial study and possible staged improvement efforts that would lead to future physical improvements. This process would be owned and operated by the City of Denver but informed through a community committee process made up of individuals that represent the La Alma Lincoln Park neighborhood. At that time those in the room that represented the Santa Fe BID and the neighborhood committed to identifying who those people would be and communicating that list as soon as possible. More updates to come.

To review, the Santa Fe BID is still pushing for the improvements listed in the intermediary section of it’s original priority proposal which are;